The article “County-Level Correlates of Terrorist Attacks in the United States,” by Lafree and Bersani (2014), draws on social disorganization theory in effort to develop and test a set of hypotheses about the expected effects of several structural measures on the frequency of county-level terrorist attacks.  The possible link between social disorganization theory and terrorism is well articulated by Durkheim (1951 [1930]), who suggested that a well-organized society integrates members into the whole, provides them with a sense of community, and offers them realistic goals and aspirations.  If there is a breakdown in social organization within that community, both informal (family, work, school, and voluntary organizations) and institutional (law and the legal system) sources of social control lose their ability to channel individuals into conventional behavior.   Consequently, social actors may choose to engage in a wide array of antisocial behavior, to include political violence. 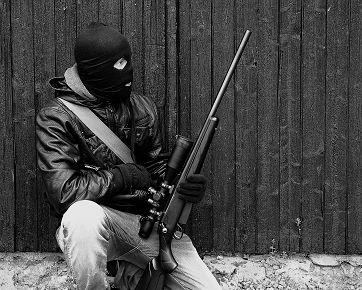 All county-level indicators of social disorganization (e.g., population heterogeneity and residential instability) and control variables (e.g. race and ethnicity) were taken from the 1990 and 2000 U.S. Census data.  The measure of terrorism attacks in the U.S. was taken from the Global Terrorism Database (GTD) between the years of 1990-2011. To account for population heterogeneity, two measures were scored: percent foreign born and language diversity.  Residential Instability was measured by two variables: percentage of residents 5 years old or older who resided in the same household for 5 or more years prior to the survey, and the percentage of owner-occupied housing units in the county.  Concentrated disadvantage was measured by the percentage of families below the poverty line, unemployed individuals in the civilian labor force, female-headed households with children younger than 18 years of age, individuals in low-wage employment positions, and individuals receiving public assistance.  The measure of urbanization captured the percentage of individuals living in areas (territory, population, and housing units) with a population of 2,500 or more inhabitants.

In terms of population heterogeneity (hypothesis 1 and 2), it could be that more heterogeneous counties are targeted by terrorists more frequently, or that terrorist attacks are more often committed by those living in more heterogeneous counties (either by the more heterogeneous members of those communities or by others).  Alternatively, counties characterized by high levels of population heterogeneity may raise unique challenges for law enforcement resulting in less effective prevention.  It could also be a combination of these factors is what causes an increase in terrorist attacks.  A range of these possibilities may be true and are shown to have some support by other research (Lafree and Bersani, 2014).  The common residential instability argument of social disorganization theory, which posits that high neighborhood mobility destabilizes communities by weakening social ties, impeding communication, and undermining the ability of residents to establish and uphold norms, seems also to have some support in explaining community level instances of terrorist attacks (Lafree and Bersani, 2014).  It could also be the case that police are simply less effective in communities that are undergoing rapid population change (Greene and Herzog, 2009; Weisburd and Braga, 2006).

The finding that increases in concentrated disadvantage reduces the terrorist threat (hypothesis 4) was ultimately unsurprising given that research generally shows terrorists are not drawn from poor communities, and those who do participate in terrorism are typically better educated and more prosperous than the population as a whole (Krueger and Maleckova, 2003; LaFree and Ackerman, 2009).  Although hypothesis 5 was largely assumed to be true (increased urbanization leads to an increased terrorism threat), there was an overall dearth of empirical research investigating the connection between urbanization and terrorism.  Further, why such a connection exists is still not entirely clear.  It could be that planning and execution of attacks are easier to do in urban areas (where formal and informal social control may be weaker), that urban areas provide a wider range of symbolic targets, or because of a combination of these and/or other possibilities (Lafree and Bersani, 2014).

Given the statistical significance of population heterogeneity as a predictor of terrorism, Pelfrey (2014) argues that police who serve disparate communities need to better assess their own efforts and initiatives relative to cultural, racial, and ethnic diversity.  His main argument is that police should embrace omniculturalism, as opposed to alternatives such as assimilation (melting pot approach) or multiculturalism (where enclaves of ethnicities exist concurrently).  Omniculturalism advocates a two-stage socialization process.  During stage one, the object is to identify commonalities among people that supersede race, religion, and culture.  In stage two, intergroup differences and distinctiveness are introduced.  Survey research conducted by Moghaddam and Breckenridge (2010) found broad support for omniculturalism in a nationally representative population, favored over assimilation or multiculturalism.  Further, those endorsing omniculturalism also reported lower fear of terrorism.

In effort to ameliorate intergroup tensions, Pelfrey (2014) argues that police should encourage the development of community advisory councils populated by representatives of different ethnicities, religions, immigrant groups, and public/private agents.  The community advisory council can be a forum for both communicating information to the police and channeling information from the police to the community.   Separately, police should advocate for, and take part in, community activities that celebrate cultural heritage, such as ethnic festivals.  For example, in 2008 the New York Police Department (NYPD) created the NYPD Cricket League—a police sponsored sports league for teens.  The goal of this league was to make in-roads with central Asian (particularly Muslim) communities by winning over kids, their parents, and communities.  Many of the teams were also coached by NYPD officers of Asian descent.  More recently, the city of Chicago experienced great public support for its Little League national champions.  That support went beyond race and religion, unifying peoples of many backgrounds (Byrne, 2014).   Police would benefit from advocating for and participating within innovative initiatives like these.  Not only could similar programs serve to improve community relations, but they would also likely enhance intelligence efforts to combat terrorism and crime, as citizens who develop trust with the police may be more willing to talk to the police.

The geographic dispersion of terrorist attacks reported by Lafree and Bersani (2014) also shows that terrorist attacks occurred in every state except Delaware, Hawaii, and Alaska.  Importantly, however, the worst attacks were planned and developed by terrorists living in or passing through small suburban or rural communities.  Thus, the opportunity to detect behaviors potentially linked to terrorism is not always in urban counties (Wermeli, 2014).  Furthermore, Braga and Weisburd (2010) show that even within major cities, less than 5% of the areas of the city account for 80% of the crime.  It is plausible to assume that this same phenomenon could also hold true in terrorism activity.  It may therefore be worthwhile to commission research that takes terrorism data down to the neighborhood, as opposed to the county level.

Despite the previously discussed limitations of county level analysis of terrorism research, Wormeli (2014) argues that it is still reasonable to allocate resources in proportion to the risk, and counties where the risk has been measurably higher should receive a proportionally greater investment in terrorism prevention.  Measures that could prove effective in counties with a higher terrorist threat include documenting the vulnerabilities of critical infrastructure, monitoring the purchasing of certain chemicals, deploying sensors capable of detecting weapons of mass destruction, increasing intelligence efforts, and training local police and other first responders to observe and report suspicious incidents.  It is also essential for law enforcement to promote policies that encourage increased information sharing between the affected counties and those seeking to prevent such attacks.  For example, expertise and knowledge about precursor events, radicalization efforts, and methods and means employed to execute terrorist acts should be promptly shared across police departments.

Greene, J. R., & Herzog, S. (2009). The Implications of the Formal and Social Organization of Policing in the US and Israel: Some Concerns and Opportunities. To Protect and To Serve (pp. 143-175). Springer New York.